How justified are the imminent recession fears? 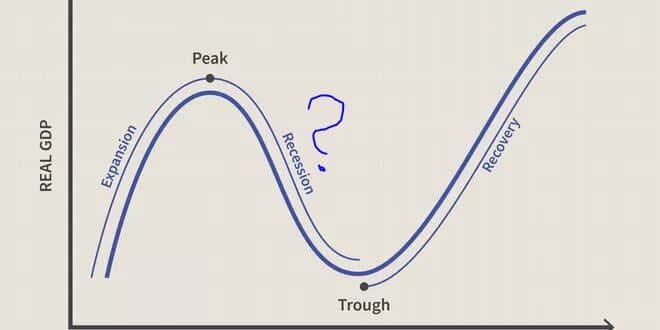 Many (and more every day) market pundits are raising their voices over “an imminent recession due. Given the recent stock market plunge of 20-30% top to bottom dependent on the index taken into consideration, it seems justified to be asking this question indeed.

It comes even more out loud, if one takes a look at the 1Q22 GDP reading for the US economy, which was a negative QoQ change of -1,4%. Now according to the the National Bureau of Economic Research (NBER), which is the ONLY body to name recessions in the US, a recession is “a significant decline in economic activity spread across the economy, lasting more than two quarters which is 6 months, normally visible in real gross domestic product (GDP), real income, employment, industrial production, and wholesale-retail sales”.

So we’re talking TWO QUARTERS (or more) of negative real GDP for the NBER to be considering it a recession. Also, always keep in mind, the recession is always called ex-post, not at the time of it starting (and even more so not ex-ante). We have one quarter done, we have a clear economic slowdown underway with consumer sentiment, industrial production worsening. Last but not least we have a stock market telling us it’s almost inevitable for the recession to be happening in front of our eyes.

And here we come to the clue of the question on whether the recession is just around the corner or maybe not so. 🤔

As the above attached great article from the Federal Reserve Bank of San Francisco neatly explains, the yield curve has ALWAYS been the best indicator on whether the recession is due or not. It has done worse usually in timing the recession exactly. This problem stems from the fact that the yield curve is an extremely complex animal, combining the very short term Fed policies (which it has under control), as well as very long term expectations as to inflation, price of money and their dynamics (that had been as a rule out of the Fed’s control mostly, although it has been starting to change since ever QEs were introduced in the Western World and beforehand in Japan – data here: www.nnip.com/en-INT/professional/insights/articles/the-bank-of-japans-yield-curve-control-strategy-is-coming-under-pressure).

To conclude the article: ⚖
– there’s two major spreads on the yield curve that have the biggest forecasting power in terms of calling recessions: the 10Y-2Y and the 10Y-3M
– scientific works generally acknowledge that the 10Y-3M curve has better predicting power that the 10Y-2Y spread, because it takes into account more variables over which the Fed has control
– currently the 10Y-2Y is the one showing increased recession possibilities (just around 20%), whilst the 10Y-3M one shows the probability of a recession 12 months out as low as 4% (lowest since 2017)

As Jamie Dimon recently said “You know, I said there’s storm clouds, but I’m going to change it … it’s a hurricane,” (www.cnbc.com/2022/06/01/jamie-dimon-says-brace-yourself-for-an-economic-hurricane-caused-by-the-fed-and-ukraine-war.html). But that does not mean it’s imminent. The curve further out (2-3yrs out) shows troubles ahead), but in the short to mid-term we’re rather facing a late-cycle economic picture change, not a recession. It is somewhat reminding of 2018.