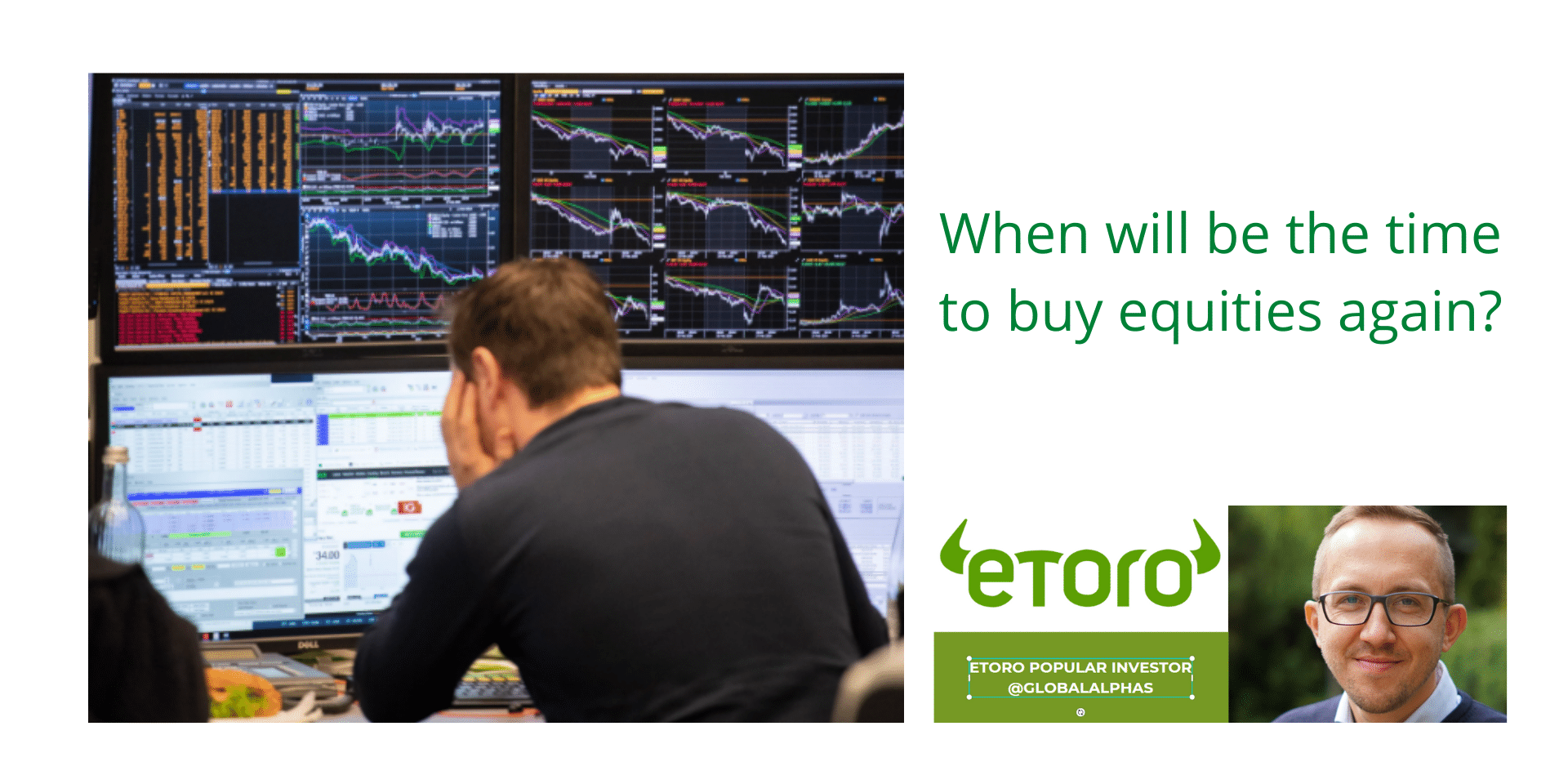 Many investors scratch their heads these days as to whether the current market circumstances we’re facing constitute a good buying opportunity for stocks. In this short article I am trying to assess this question from three different perspectives: macro, micro and technical.

This point of view is possibly the biggest worry for the equity markets these days. It is namely the macroeconomic conditions that the world is facing that make markets so nervous, as they pose justified questions as to the stability and sustainability of economic growth going forward.

Let’s quickly summarize the biggest macro risks currently:
👉 Inflation – buy far the biggest immediate risk. Inflation is now hottest by most measures since 1970’s. Generally attributed to disrupted supply chains during the Covid-19, very aggressive fiscal and monetary policies resulting from the pandemic and unexpected changes in demand for goods. source: en.wikipedia.org/wiki/File:Inflation_M2_CPI.webp
👉 Fiscal Debts – the 2nd biggest short-term and possibly the biggest long-term problem. During the last 2 years governments have issued unprecedented amounts of new debt to fight the results of pandemic, which resulted in debt/GDP ratios skyrocketing further from already elevated levels in most western countries. US for insatnce increased their debt/GDP ratio from less than 100% to way over 120% in just 18 months. source: www.longtermtrends.net/us-debt-to-gdp/
👉 Monetary Policies – it is widely discussed in most media these days whether central banks are doing what they should to maintain price stability (most banks’ main policy target) and maximum employment (some banks’ policy target). The general consensus view leans towards CBs being way behind the curve with adjusting the price of money (interest rates) to the current CPI rate. They are trapped though between the necessity to act fast now and the consequences of higher interest rates to the costs of servicing fiscal debts. For now there seems no good way out of this trap than an eventual debt crisis, time will tell.
👉 Geopolitics – escalation of Rus-Ukr tensions are very serious.

As we all know macro conditions determine micro conditions to much extent. but usually there is a certain lag between macroprudential policy actions and their effect on microeconomic level. As of now employers (companies and corporations) and the employees (labour market) are doing just fine.

Here’s some stats:
👉 The End2022 $SPX500 EPS (on a consensus basis) is expected to reach USD225, which means a 8,4% YoY growth. Profit margin is expected at 13,4%, also improving YoY.
source: www.yardeni.com/pub/yriearningsforecast.pdf
👉 $SPX500 3Q21 earnings yield stands at 4,49% nominal and -0,85% real (adjusted for inflation). This is still a yield that makes an investor better of than holding bonds (with the US 10y yield at roughly 2% now). Given the above and the fact that bond yields will rather only go higher in the upcoming quarters, it is still more sensible to hold eqtuieis in general – they do a better job for an investor.
👉 Labour market: unemployment rate is at or below 4% in US currently, a level from before the Covid event, a level that can surely be called full employment. Moreover, wages and salaries are rising at a pace north of 1% QoQ, which is also unprecedented. source: tradingeconomics.com/united-states/unemployment-rate tradingeconomics.com/united-states/employment-cost-index-wages

The big questions here from the micro perspective is: what will be the effects of macro policies on economic conditions going forward. Given the fact that according the macro model I am using (Enhanced Aggregate spread by Dr. Robert Dieli) we’ve just entered the Boom phase of the economic cycle (this Jan), we should be on the look for signs of instability and unsustainability going forward, which will most possibly appear as the Fed (and other CBs) proceed with their tighterning policies. The effects shall possibly be seen in data like industrial production and private payrolls growth. The risk is rising for the Fed to be made to act too quickly, risking recession. As of now recession is neither mine nor the market’s basic scenario. Watching the yield curve behaviour for a potential inversion will be crutial.

I’d also wait for the following to be increasing equity longs:
👉 Fear&Greed below 25
👉 MACD Weekly below 0*
👉 RSI Weekly below 33*
*For the whole index