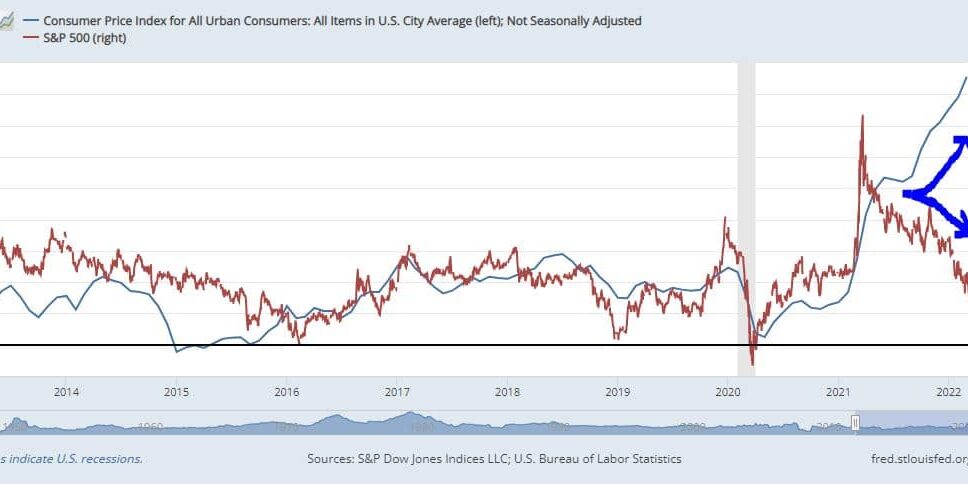 Over the last decade the correlation between inflation (measured by CPI YoY change) and the $SPX500 returns (also YoY) was clearly positive and pretty stong.

Higher moderate inflation (below 3%) usually meant higher GDP growth, higher EPS growth for US corporations and generally healthy economic conditions. This naturally impacted stocks returns. Lower inflation (perios of 2015 and 2018/2019) were interpreted by investors in an opposite way, which caused YoY returns from the $SPX500 to fall, reaching 0-ish levels in Feb 2016 and Dec 2018.

Back then recessionary fears were pretty elevated. Before 2016 they had to do with the start of interest rates increases cycle (the market was not sure wheather equities and the econnomy will be able to withstand higher rates), whilst in 2018 fears were mostly caused by forward EPS growth flattening and the Fed tapeing. Both periods generally had one in common – toughen monetary conditions. Inflation, which back then was mostly demand-driven inflation (read: under Fed’s control) naturally eased as well in both periods.

But, as you can clearly see, since May 2021 we’re living in a totally new paradigm. We’re having CPI stubbornly surging higher, whilst the YoY $SPX500 returns have only been drifting lower since then.

Around May 2021 is when the Fed started to slowly switch from its “temporary inflation” rethoric to “inflation is an issue” one. Since 3Q21 this topic settled in for good in the market as the main problem for growth sustainability and started building the stagflation fears scenario, which morphed into recession fears scenario. The Nov/Dec 2021 hawkish swing and announcement of agressive tapering plans only sped it up. And yet in Feb 2022 the war came, which only deepended the supply-driven inflationary pressures stemming from commodity and supply-chain disruptions.

And this is the biggest difference between now and 2015 and 2018/2019. The type of inflation issue. The one we’re facing right now (supply-driven) is mostly out of Fed’s control and hence is much less controllable by the central bank. This explains why the Fed is now trying to be as agressive as possible in fighting rising prices. Still its impact on the CPI is far from clear going forward.

So what’s in it for investors (my view)?

✅ Stay prepared for a prolonged period of increased volatility in risky assets (like equities, etc)
✅ The Fed will hike, but real rates will stay deep in the negative territory for the foreseeable future, which still supports equities
✅ Although some parts of the yield curve flatened (like the 2Y-10Y) it is not yet a sign of imminent recession, but rather a sign of problems in the future (18-24 mnths out or longer)
✅ We’re most possibly in the start of a mid-cycle period of more hawkish monetary policies – this time a very abrupt one.
✅ The growth prospects are still positive and coincident indicators like Industrial Production (+7,5% yoy), Payrolls (at pre-pandemic levels), unemployment 3,6% and othres show no signs of economic situation worsening.
✅ Higher stubborn inflation will most possibly start eating into corporations’ profit margins sooner or later (a mid-term threat to EPS growth).
✅ The Fed has to act decisively now, not to allow inflation expectations run out of control – this (if happens) I would see as the biggest risk of an imminent recession caused by the Fed, as it would then have to act even more aggressively then it plans now.
✅ CPI dynamics need to be very closely watched, a possible inflation peak (which some call happened already with the last reading) will most possibly constitute a mid-term bottom for equities.
✅ Overweight Value over Growth and overweight cyclicals plus commodities
✅ Recession is not my base case scenario at the moment for the next 12 months forward.

Find me on eToro! https://www.etoro.com/people/globalalphas
5 January 2023