The Theory of Economic Cycles – the Basics 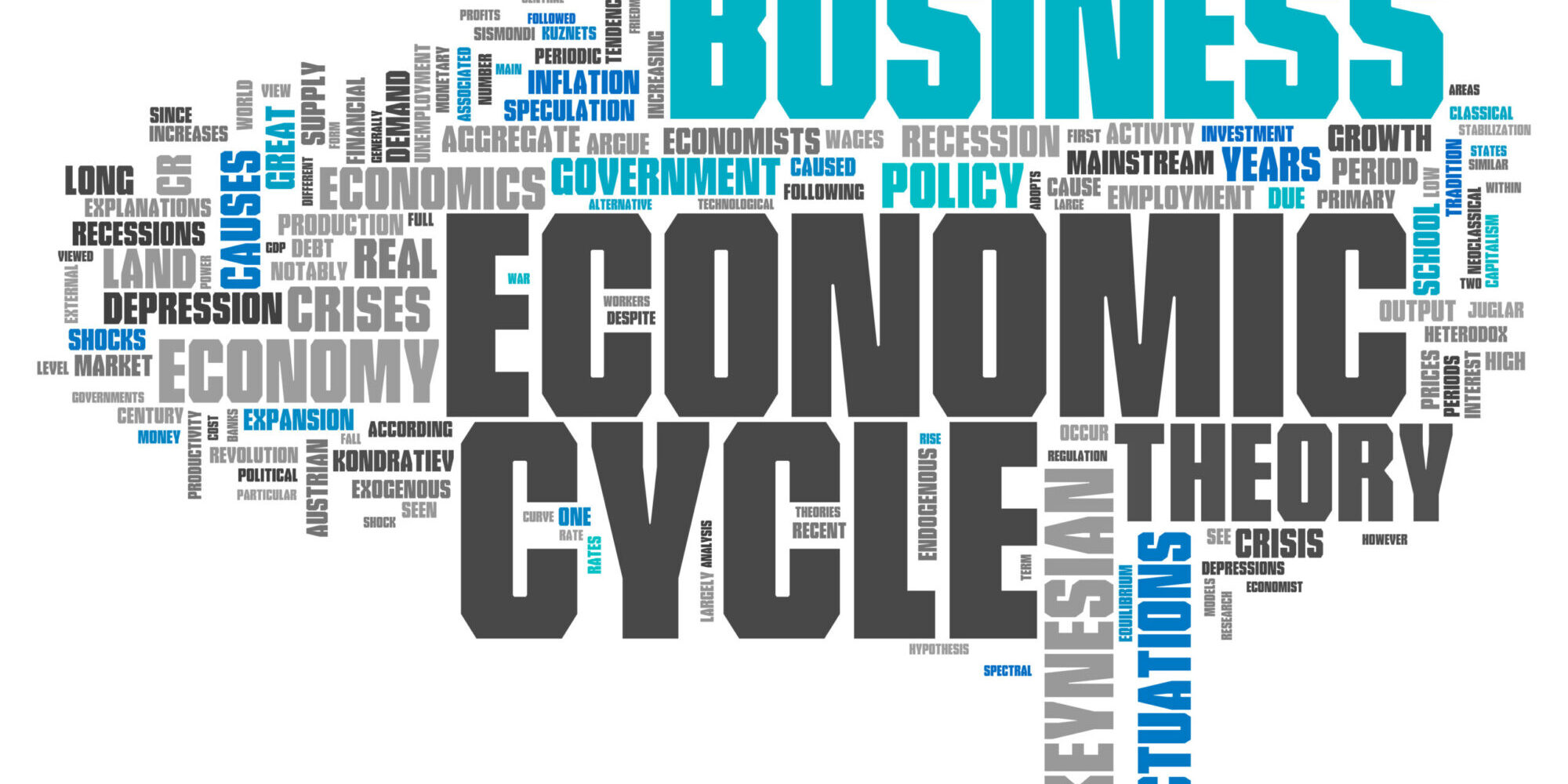 I have also already explained the phases of economic cycle in one of my main posts explaining our macro forecasting tool – the Enhanced Aggregate Spread model by Dr. Robert Dieli. You can find the details of this post here. It is very important to go through it for anyone who wants to fully understand the investing approach I present on this site.

First it needs to be stated that over the long run economic growth is naturally positive. It can be clearly stated by looking at a long term real GDP chart of any industrialized country. Below is the case of USA for the period 1970-2009 (gray areas are recessions as per National Bureau of Economic Research):

So over the long run economic growth has a positive sloping tendency. Within that trend the economic activity (and as a result the aggregate output of an economy measuded by GDP) has a sinusoidal character. This Output is determined by 3 main factors: Productivity, Labour and Capital. The function of production (Output) can thus be written as follows:

Equasion 1: Output = Productivity x Output as a function of Capital and Labour

Labour in general is the number of people able and willing to work, also referred to as Labour Force. Some most general definitions of Labour are:
Brittanica – “Labour, also spelled labor, in economics, the general body of wage earners. It is in this sense, for example, that one speaks of “organized labour.” In a more special and technical sense, however, labour means any valuable service rendered by a human agent in the production of wealth, other than accumulating and providing capital or assuming the risks that are a normal part of business undertakings. It includes the services of manual labourers, but it covers many other kinds of services as well. It is not synonymous with toil or exertion, and it has only a remote relation to “work done” in the physical or physiological senses.” The Balance – “Labour is the amount of physical, mental, and social effort used to produce goods and services in an economy”.

Capital is in general, as Adam Smith defined it, “that part of man’s stock which he expects to afford him revenue”. There’s different types of capital: physical or non physical. But all kinds of capital are some assets that can enhance somone’s work. The total physical capital at any given moment in time is referred to as the capital stock, and for simplicity, it’s what we will refer to in that article.

Output (GDP) growth, or the growth of total value of goods and services produced, usually fluctuates around its natural growth level called potential GDP growth (in short: the rate of growth not causing the economy to destabilize in any matter). There’s times when actual GDP grows faster than its potential (causing a so called positive output gap) or below its potential (negative output gap). As you can see clearly on Chart 1 above the US economy (as most other economies) shows postive output gaps into the end of economic cycles (before contractions/recessions) and a negative output gap into the start of recovery periods. Positive output gaps are usually proinflationary and negative output gaps are deflationary (or disinflationary). So in general the thing that makes economic cycles what they are is really the difference between the actual growth and potential growth, as this causes policymakers (both monetary and fiscal) to act in a certain way with specific results to the economy (more on this below). Both the government and the central banks are interested in reaching a long-term balanced growth as close to the line of potential GDP growth as possible. For the fiscal authority it means balanced state budget, for the central bank it means inflation under control and for both of them it means stable and healthy labour market, stable currency, etc, etc. Everybody is happy as the economy grows at its potential pace. Of course this potential is hardly achieved or maintained for long. That’s why studying economic cycles is the utmost important issue for the authorities and financial professionals.

There’s many theories about cycles, but there’s generally two major trends in the contemporary science that are mostly used and commented:

This theory assumes that cycles come from exogenous and real factors, which somehow disturb the general production function (Equasion 1). GDP is measured as:

External shocks to any of those constituents will be reasons for the cycles to fluctuate. The way people change to consume, the amount of consumption, the size and style of government spending, changes in labour force by size, structure, etc – these can all be the causes. Such shocks are also deemed random, cannot be foreseen. Additionally productivity shocks also have an effect (caused for instance by natural disasters, big swings in commodity prices, etc).

Additionally classical theory assumes that the economy generally comes to an equilibrium in the longer run and deviations from that state can only be short-lived. Hence the Aggregate Supply (AS) line from the basic macroeconomic AD-AS model is in the long run vertical (the economy is always in equilibrium in the long run). Exogenous productivity shocks cause the AS line to move left (negative shocks, i.e. sudden higher oil prices for an oil importing country – red arrow) or right (positive shocks, i.e. the opposite – green arrow), eventually causing higher or lower general price levels respectively:

Shorcomings of this theory are twofold: 1stly real-world observations tend to show that during recessions/contractions (unless caused by a sudden price shock like oil prices jump) prices fall and not rise, 2ndly the fact that shocks are assumed exogenous gives no explanations as to their real sources.

The theory assumes rigid prices in short-term (that includes prices of goods and services as well as wages). If there’s something wrong with the economy, there’s more of a reaction in quantities produced rather than prices. In an extreme case prices are generally given in the short run (read: AS line from AD-AS model is horizontal). Additionally Keynesian approach argues that it’s rather the aggregate demand (AD) shocks that are sources of business cycles (and AS is stable over the longer run). The shocks coming to the economy are endogenous (unlike in the classical theory) and mainly come as a results of changes in expectations (which can be self-fulfilling). As an example take a general increase in consumer optimism about the future, which causes firms to produce more, investors to provide capital more willingly, general investement and output to grow and aggregate demand to grow as well (the opposite is of course true as well). In such a case the general AD-AS relation could be presented as follows (red arrow – pessimism induced negative shock; green arrow – optimism induced positive shock):

As I have already mentioned before none of the authorities like to run their policies in a wide-sinusoidal cycle, hence the aim of both the government and the central bank is to kind of smoothen the cycle’s ups and downs to lead the economy as close to its potential growth as possible (as already said this is hardly ever achieved). To produce such effects the authorities must support the conomy on its downs and temper it on its ups. These are called countercyclical policies aimed at long-term stabilization of growth.

In the classical approach, which assumes that the economy is generally in equilibrium by fast-adjusting prices, the impact of the government policies on the demand side is limited and does not cause direct impact on output. Also the monetary policy is neutral to the real economy in this case and the central bank influences only the nominal prices, wages and interest rates. Hence the authorities should concentrate on the supply side (AS) by mainly promoting productivity growth.

The Keynesians on the other hand see prices and wages as stiff and hence see biggest use in demand side (AD) policies like government spending or the central bank’s money supply management.

I hope that this article has put some light on the origination of the business cycles for you. As you can clearly see “every stick has two ends” and interpretations as to what causes the economy to fluctuate over time are different and there’s never just one simple answer. But that’s what the science of economics is all about. It’s about “buts” and “ifs” :).

Disclaimers: None of the ideas, views and thoughts presented here shall ever be taken as a recommendation to buy or sell stocks,bonds,FX,commodities or any other financial instruments as stated in REGULATION (EU) No 596/2014 OF THE EUROPEAN PARLIAMENT AND OF THE COUNCIL of 16 April 2014 on market abuse (market abuse regulation) and repealing Directive 2003/6/EC of the European Parliament and of the Council and Commission Directives 2003/124/EC, 2003/125/EC and 2004/72/EC or the Regulation of the Polish Minister of Finance of 19 October 2005 on information constituting recommendations regarding financial instruments, their issuers or exhibitors (Journal of Laws of 2005, No. 206, item 1715) or the Polish Act of 10 February 2017 amending the act on trading in financial instruments and some other acts. The article is for educational reasons and purely presents private views of the author, thus the author shall not be claimed eligibile for any losses of a third party resulting from trading activities based upon this article. The author uses his best knowledge and data from sources believed to be reliable, but makes no representations as to the accuracy of the data. Full Disclaimers&Liability Limitations page.
Categories: Investing, MacroBy Pawel Cylkowski28 July 2020Leave a comment
Tags: asset allocationbacktestingderivativeseconomic cycleetfglobalalphasearchgrowth stocksinvestingmacroeconomicspension portfolioportfolio managementrisk management
Share this post
Share on FacebookShare on Facebook TweetShare on Twitter Share on LinkedInShare on LinkedIn