Books to read for Smart Investors 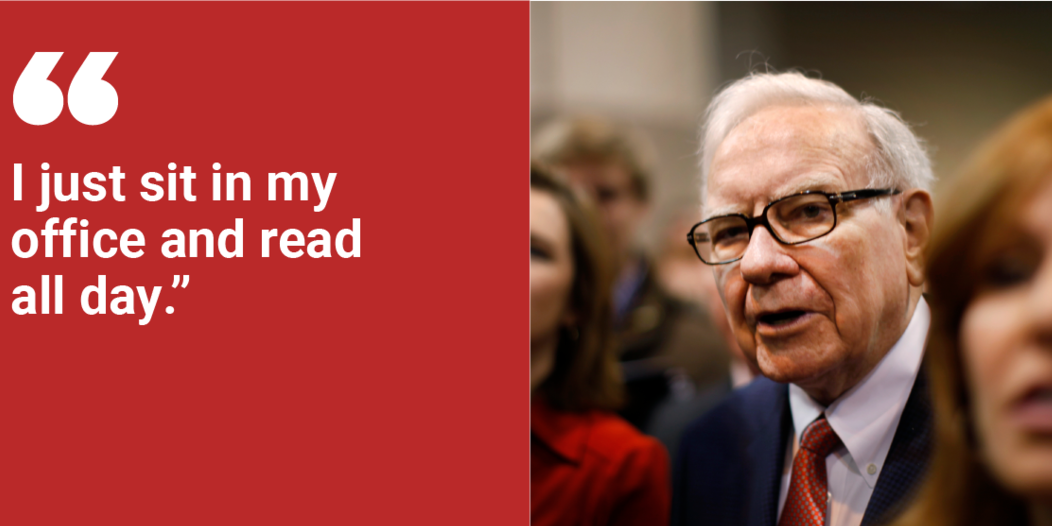 Looking for a good read? In this post I present and describe the best books that I personally recommend and think a serious long-term investor should read to improve his understanding of investing and widen his knowledge about capital markets and its instuments. In today’s world knowledge is everything really. Hence it is extermely important to keep developing constantly and read, read, read. Just as Warren Buffett does all his days in the office (see the graphic above)😊 .

There’s posibliy millions of books worth reading, but of course our time and perception are both limited. Hence everyone is usually trying to read the kind of books that seem the most interesting and valuable for the area of life they are trying to study. As far as economics, finance and especially capital markets are concerned there’s of course a lot of academic studies that lay out the fundamentals and economic theories. For the students of finance, banking or economics this is they way to study their way through the way the financial world works. But there is also plenty of books that are not necessarily academic, but are still extremely valuable, as they are mostly written by market practicians. I personally value those that explain the behavioral part of the market’s functioning. Although behavioral finance has been a growing part of academic studies, most market participants (expecially the less experienced ones) underestimate the thing that market is just a mix of fundamentals (the ever relapsing mean reversion – a longer-term fenomenon) and the constant war of human fears and greed (the sinusoidal shorter-term moves around the long-term mean that can be very wide and painful).

I genuinely believe that finding an own way in investing is about finding a proper mix of understanding fundamentals as well as the psychological aspect of capital markets.

For the ones looking to selfstudy professional financial knowledge I suggest using the materials and courses preparing for industry titles like Chartered Financial Analyst (CFA) published and organized by the American CFA Institute or Chartered International Investment Analyst (CIIA) by the European Association of Chartered International Investment Analysts. These are possibly best certificates, if you plan your career in the financial industry.

Below I present a subjective list of 10 of my favourite books about investing and macroeconomics. The list could be much longer, but I decided the 10 pieces will be enough to start and will give the best overview of what a Smart Investor should learn and know. The list will be split into fundamental books (pure knowledge) and what I called behavioral books (meant by books that are not only about numbers, but also treat upon the psychologial aspects). Please note that I am a member of the Amazon Associates Program and a purchase of any of the below books via the links I provide might earn GlobalAlphaSearch.com some commission for the maintenance of the service. If you’re interested in any of the books please just click on the cover graphic on the left. Thank you for that in advance! 👍

Please do not pay attention to the order of the books. This is not a ranking!

Possibly one of the best books about investing in the history of finance. Practical and showing a real-life investing method of an author that was one the capital markets’ greatest minds. I am tlaking about Benjamin Graham of course, the teacher and in some way creator of what Warren Buffet is now.

Graham introduces the idea of value investing and explains it in details.

Some claim that value investing is long gone and outdated, since the world of zero rates and flood of central bank money caused the markets to favor Growth over Value since 2 decades now. But this might some time change, and Value is what eventually defends itself in any circumstance. Hence, I think this is a must-read for every prospective investor.

I have an old version of this book, but this 10th edition has some additional contemporary issues and discussions involved.

Just like Hull’s “Options..” it’s long, but really worth reading to the end. Pure knowledge.

Murphy’s piece is pretty much mainstream for practicioners using technical analysis. The fundamentalists will quarrell technical analysis does not make much sense, and so will it go the other way round. I think the truth is always somewhere in the middle. Technical analysis, although not used by myself on a highly sophisticated level, can be very useful in catching trends and finding too disproportionate deviations from the long-term fundamental mean.

Graphs, formations, oscillators and their practicla use is all explained here.

If you’re looking to find a really fundamental and analytical way of selecting stocks, try this book. This book is nicely writte, even though it’s meant for professionals. It explains most currenlty used methods of valuation of securities, as well as methods of analysing financial reports (P&L, B/S, CFS).

It’s good for both investors and analysts and accountants.

For those of you with a macroeconomic skew (like me 😁) I suggest to have this one. It’s rather compund, but still covers most of the macro indicators that matter and impact financial markets. You will learn here how GDP, GNP are calculated and forecasted, you’ll learn to go through labour market stats, industrial production, orders, inventories, leading and coincident indicators, inflation, consupmtion and many other.

I always have a top-down perspective and I think every investor should work on widening their basic macroeconomic knowledge. In today’s global villige, where the world is so connected, it matters even more.

“Valuation: Measuring and Managing the Value of Companies” McKinsey&Co.

McKinsey is a very renowned financial consulting copmany and this piece is used by millions of practicioners.

For serious guys only.

This one is a old a 1923, but it’s one of my absolute favourite’s. It’s easy narration and in-depth analysis of an investor’s, trader’s or (as it was once called) stock operator’s psychological perspective is just amazing.

Even though the book is now almost 100 years old, it is a perfect guide through the filed of crowd psychology, which is the base of behavioral finance pretty much.

The book is based on a true story of famous Wall Street trader/investor Jesse Livermore (under the name Larry Livingstone here). Livermore was back in his days claimed one of the greatest speculators ever. Think even today many could learn from him. The book describes all his famous ups and unfamous downs, showing the reader exactly how one should and should not behave while operating stocks.

Great read, for everyone!

Famous Mr.Doom’s piece on the origination and consequences of the 2007-2009 Great Financial Crisis (GFC). With this book Nouriel Roubini came into the hall of fame of world class economists.

The history of Fed Chair Ben Barnanke and his first tough years of tenure . His rocky road as successor of the star-Chair Alan Greenspan. His way through the GFC. Thsi book neatly explains the origins of the the start of the unprecedented central banking era, which is the Quantitative Easing,as well as the consequences of Greenspan’s too dovish policy.

We’re now over a decade through the different forms of QE and in another recession, but what happened in GFC still echos today. Worth reading!

I think here it’s just best, if I paste the summary and comments on the book form Amazon:

“Ray Dalio, one of the world’s most successful investors and entrepreneurs, shares the unconventional principles that he’s developed, refined, and used over the past forty years to create unique results in both life and business—and which any person or organization can adopt to help achieve their goals.

In 1975, Ray Dalio founded an investment firm, Bridgewater Associates, out of his two-bedroom apartment in New York City. Forty years later, Bridgewater has made more money for its clients than any other hedge fund in history and grown into the fifth most important private company in the United States, according to Fortune magazine. Dalio himself has been named to Time magazine’s list of the 100 most influential people in the world. Along the way, Dalio discovered a set of unique principles that have led to Bridgewater’s exceptionally effective culture, which he describes as “an idea meritocracy that strives to achieve meaningful work and meaningful relationships through radical transparency.” It is these principles, and not anything special about Dalio—who grew up an ordinary kid in a middle-class Long Island neighborhood—that he believes are the reason behind his success.

In Principles, Dalio shares what he’s learned over the course of his remarkable career. He argues that life, management, economics, and investing can all be systemized into rules and understood like machines. The book’s hundreds of practical lessons, which are built around his cornerstones of “radical truth” and “radical transparency,” include Dalio laying out the most effective ways for individuals and organizations to make decisions, approach challenges, and build strong teams. He also describes the innovative tools the firm uses to bring an idea meritocracy to life, such as creating “baseball cards” for all employees that distill their strengths and weaknesses, and employing computerized decision-making systems to make believability-weighted decisions. While the book brims with novel ideas for organizations and institutions, Principles also offers a clear, straightforward approach to decision-making that Dalio believes anyone can apply, no matter what they’re seeking to achieve.

Here, from a man who has been called both “the Steve Jobs of investing” and “the philosopher king of the financial universe” (CIO magazine), is a rare opportunity to gain proven advice unlike anything you’ll find in the conventional business press.”

This one is not only for the ones looking for wisdom in investing, but also in everyday life. Ray Dalio is possibly one of the biggest walking successes on earth now. A self-made billionaire, but 1st of all mentor and philosopher.

So, hopefully you will find something for you on that list ha? Happy reading, happy learning!

Disclaimers: None of the ideas, views and thoughts presented here shall ever be taken as a recommendation to buy or sell stocks,bonds,FX,commodities or any other financial instruments as stated in REGULATION (EU) No 596/2014 OF THE EUROPEAN PARLIAMENT AND OF THE COUNCIL of 16 April 2014 on market abuse (market abuse regulation) and repealing Directive 2003/6/EC of the European Parliament and of the Council and Commission Directives 2003/124/EC, 2003/125/EC and 2004/72/EC or the Regulation of the Polish Minister of Finance of 19 October 2005 on information constituting recommendations regarding financial instruments, their issuers or exhibitors (Journal of Laws of 2005, No. 206, item 1715) or the Polish Act of 10 February 2017 amending the act on trading in financial instruments and some other acts. The article is for educational reasons and purely presents private views of the author, thus the author shall not be claimed eligibile for any losses of a third party resulting from trading activities based upon this article. The author uses his best knowledge and data from sources believed to be reliable, but makes no representations as to the accuracy of the data. Full Disclaimers&Liability Limitations page.